Four Things Co-operatives Can Do that Corporations Can’t

Most people are probably already familiar with the concept of co-ops, likely due to the widespread success of food co-operatives—usually small, often organic, affordable grocery stores run by people who band together to buy their food in bulk to lower costs.  But in reality, food co-ops are only one of the many types of businesses conducive to a co-operative model.

Co-operatives are, by definition, democratically owned and governed by the people they serve.  This means there are no shareholders, and no one can purchase more decision-making power than anyone else. Instead, the people who benefit from the co-op’s services are in charge, and each member has equal influence over the organization’s management—one member, one vote.  There are worker co-operatives, credit unions, school co-operatives, and, yes, even energy co-operatives.  In fact, if it weren’t for the network of rural electric cooperatives across the country, people living in remote areas of the United States wouldn’t even have access to electric lighting, much less the internet.

Many small businesses in the US use the co-operative model, and some have even scaled up and expanded to become household names, like ACE Hardware, REI, Welch’s, True Value Hardware, and Land O’ Lakes.  Whole Foods was once a food co-operative dedicated to providing its members with healthy organic food options. 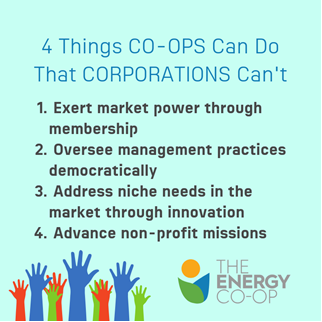 Will co-operatives make corporations obsolete? Of course not.  But because co-ops are non-profit and, therefore, can be mission-focused, they are an integral participant in our market economy by filling niche needs and leading innovation.