While new construction of wind and solar generation facilities is essential to the goal of clean energy for all, a major obstacle is posed by the current state of our national transmission grid. Years of poor planning and inadequate investment are taking their toll according to a wide array of experts including former government officials, clean energy organizations, industry groups and more, and both government and industry participants in electricity markets are seeking a better way forward. In April 2022 the Office of Policy of the U.S. Department of Energy (DOE) released a report outlining the needs, the challenges, and the potential solutions for a transmission grid that can ensure the delivery of clean electricity to the homes and businesses of all Americans. 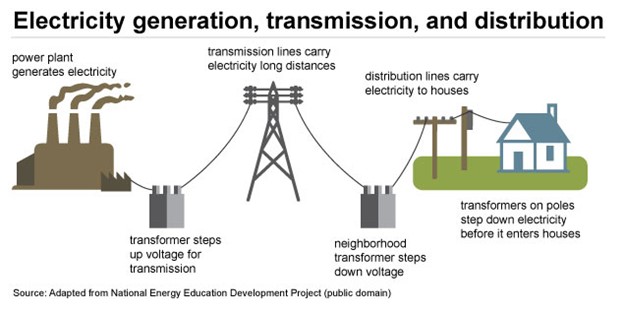 As you might guess, when large amounts of new generating capacity are added to the electricity grid, additional transmission capacity is needed as well, to ensure that there’s a place for all those new electrons to be carried before they can be delivered to their final destinations. That’s where grid planners and investors have been falling short – the DOE report notes that construction of new transmission lines has declined over the last decade, causing delay or even cancellation for many proposed generation projects. Between 2000 and 2016, it is estimated that less than one-quarter of the projects that sought interconnection were built, with completion percentages declining even further in the past decade, especially for wind and solar projects. Part of the problem has been the sheer expense involved for interconnecting generators. Under the current system, developers are responsible not only for the costs of connecting to the existing transmission system, but also for the additional costs associated with upgrading the transmission grid to accommodate the new project. It is difficult to anticipate the full scope of costs, which is why relatively few large projects actually make it to completion. A better process is needed. Because transmission grid upgrades have systemwide benefits, a holistic planning approach would be more effective than the current processing of generator interconnection requests on an individual basis.

A more coordinated planning process would dovetail perfectly with the policy approaches currently underway. The Bipartisan Infrastructure Law, passed in November 2021, specifically allocates billions in government funding to modernize the electricity grid, including the facilitation of transmission investments through financing programs and authorities. This kind of funding is a genuine investment in the future. It is widely agreed that the benefits of transmission outweigh the costs, by enabling access to low-cost generation, helping to maintain reliability and avoid power outages, and by supporting clean energy supply. A study by the Massachusetts Institute of Technology found that the system cost of electricity in a 100%-renewable US power system would be reduced by 46% under a nationally coordinated approach to transmission grid upgrades compared to a state-level approach – long term, that means hundreds of billions in savings for the US economy.

DOE announced the Building a Better Grid Initiative as the strategy by which to achieve the grid modernization goals of the 2021 legislation. The Initiative focuses on identifying critical transmission needs and implementing the solutions to meet those needs through a coordinated approach that addresses financing, permitting, and R&D. At the same time, the Federal Energy Regulatory Commission (FERC) has released a rulemaking Building for the Future through Electric Regional Transmission Planning and Cost Allocation and Generator Interconnection that proposes reforms to regional transmission planning, cost allocation, and generator interconnection processes.

Currently, there are over 930 gigawatts (GW) of clean energy capacity waiting for approval for transmission access in interconnection queues. This level of capacity would achieve 80% clean electricity generation by 2030. As many of the highest potential projects for wind and solar energy are far from existing grid infrastructure, the need for new transmission lines is more critical than ever. Getting to a clean energy future will not be easy, but a robust commitment by government and all other levels of society makes it achievable.